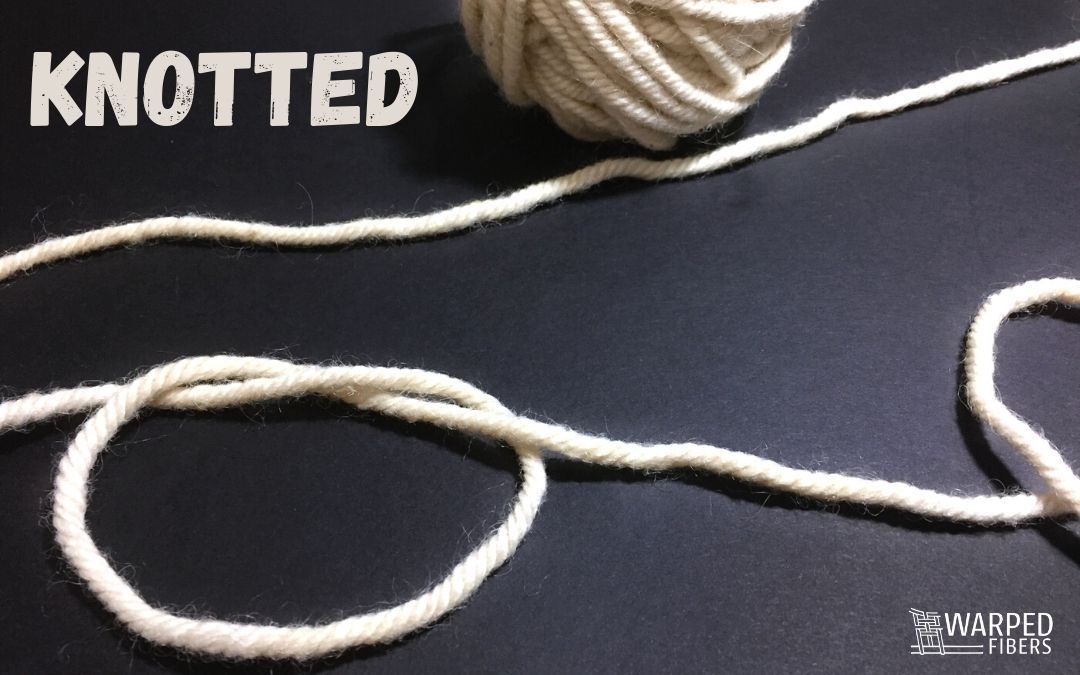 Knots and yarn a lot of times go hand in hand. This can be a good thing – or a bad thing. I”m sure we’ve all had our share of unwanted knots that keep us from our weavings or other Fiber Art. If you are getting these knots because you are using yarn by itself with no shuttle or bobbin then you might want to consider making a butterfly to keep your yarn from knotting. Otherwise, there are some useful weaving knots that you will actually WANT for setting up and finishing your weaving.

The most widely used knot in weaving and probably in general is the square knot. If you only know how to do one knot – this is the one!

You can use a square knot many different ways when weaving. I use it the most often when setting up a simple frame loom to attach my warp or scaffolding to the frame. A lot of weavers also use this to attach their warp to the apron bar on the floor loom – but I prefer the half bow for that (keep reading for that one.)

The square knot is strong and simple to do. It is hard to undo if it gets tight, though, so make sure you are ok with potentially cutting it off later.

How To Make A Square Knot:

You will want 2 open ends of yarn.

Step 4: Yarn 2 goes around and under yarn 1 (through the loop that was created.)

The overhand knot is often used as a method to secure the fringe on the end of a scarf or rug. Besides the square knot, this is probably the other most used knot on this list that you might use in other scenarios outside of weaving. While this one is very simple and well known – I figured it is still worth mentioning.

An overhand knot is useful in a lot of different scenarios – it’s also how I tie the end of my grey thread when I am attaching it to a weaving and how I tie up my warp bundles at the back of my floor loom. This knot also works well as a simple knot to secure fringe on a scarf or rug.

How To Make an Overhand Knot:

This can be done with any number of yarns.

Step 1: Create a loop with the end of your yarn(s) with the open end on top.

Step 2: Bring the open end of the yarn(s) around to the back and through the loop.

The lark’s head knot isn’t really a knot as much as a way to fasten yarn to something. It is notable as a common way to attach your yarn to a dowel rod when starting up a new macrame wall hanging. Two common ways that it can be used in weaving is for 4 selvedge weaving and on your frame loom.

When you set up a loom for 4 selvedge weaving – the lark’s head knot is used around the bar to attach it to the frame.

You can do the same thing around any object and in the step-by-step I have done it around a tree branch.

How To Make A Lark’s Head Knot:

You will want 1 piece of yarn and something to attach it to.

Step 1: Fold your piece of yarn in half and lay it underneath your dowel rod, stick, or whatever you are attaching it too with the loop end up.

Step 2: Bring the open end of the yarn up, around, and through the loop above the stick.

Step 3: Pull the yarn all the way through the loop and position where you want it.

The weaver’s knot is often used as a way to tie your new warp onto your existing warp. This is a GREAT thing to do because it can cut down on your loom set up time. If you are not a fan of the warping process and you already have some leftover warp/ loom waste still on your loom you can save yourself some time.

This is also a knot that you can use to attach 2 weft yarns together instead of dealing with tails. That is not my preferred method, as a knot can be hard to hide – but it may be an option for you to try out. If you are using it for this technique then you will want to snip off the extra tails and trust the knot to do it’s job and hold it together.

How To Make A Weaver’s Knot:

You will need 2 pieces of yarn.

Step 1: Yarn 1 should be straight and yarn 2 should be looped over at the end. Pull yarn 1 through the loop of yarn 2.

Step 2: Wrap yarn 1 under the longer part of yarn 2 at the base of the loop. It should go over the shorter part.

On a floor loom, using a half bow is my favorite way to attach my warp to the apron rod.

This “knot” is ideal for this because it is both really strong and easy to undo. Unlike the square knot that is hard to untie – the half bow comes off the rod easily. It is also stronger than a full bow because the size of the yarn around the loop is smaller and therefore holds tighter.

How To Make a Half Bow:

You will need at least 1 piece of yarn and something to attach it too. In this case I am using a frame and 1 piece of yarn that has been folded to have 2 ends. Your yarn will most likely be attached to a rod at the other end whether on a floor loom or warping 4 selvedge.

Step 1: Lay the yarn over your frame or rod with both ends together.

Step 2:  Next, bring your 2 ends around the frame and split them so there is one on each side.

Step 3: Bring 1 end over and around the other end (like the first step of the square knot.)

Essentially, the second part of the half bow is just tying a bow (like you tie your shoes) and pulling out one of the loops. This is how I tie my shoes 🙂

Step 6: Wrap the other end of the yarn over and around the loop.

Step 7: Next, pull that same end through the other loop you created when you wrapped it around (this should now look like a bow.)

Step 8: Continue to pull that second end all the way through and tighten!

Knowing these weaving knots will help you out in a lot of different scenarios – both in and out of the studio!

Do you have a favorite weaving knot? One that I didn’t mention that you use all the time?

Let me know in the comments!

⇠ Previous: When You Should Use
Shuttles, Bobbins, and Butterflies
Next: When (& Why) You Should
Double Your Tapestry Warp ⇢ 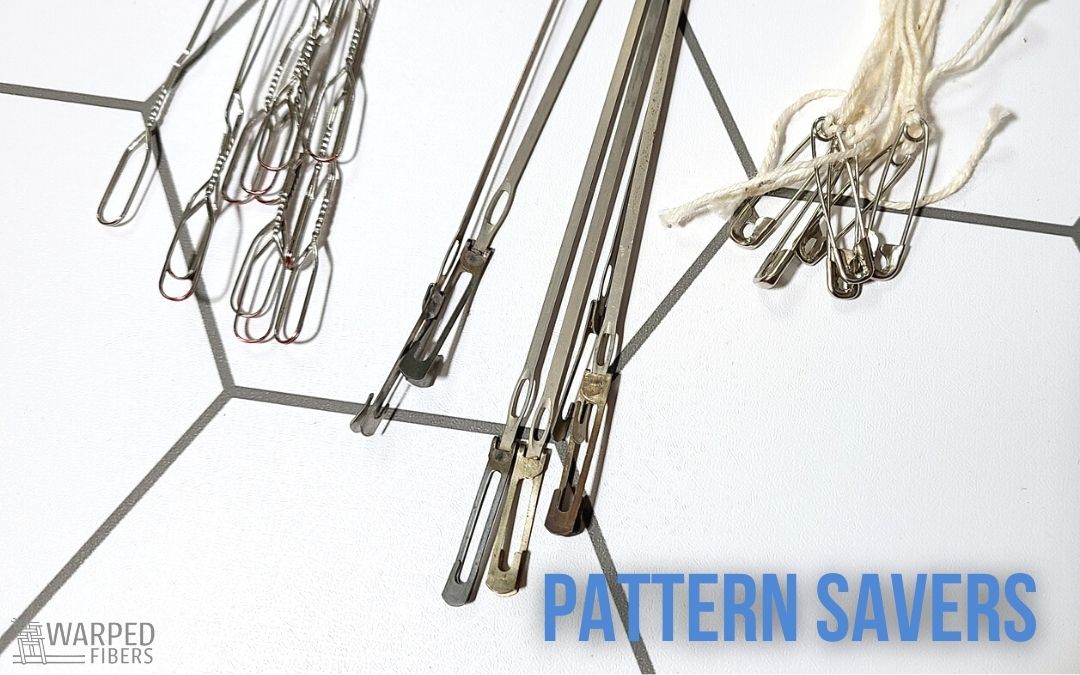 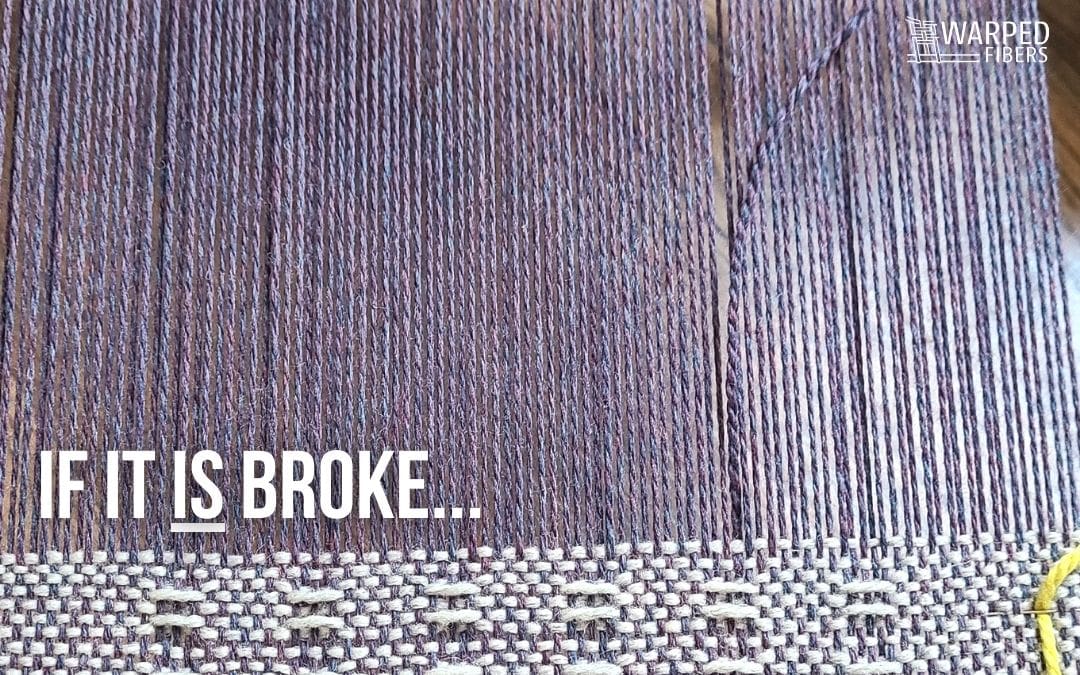 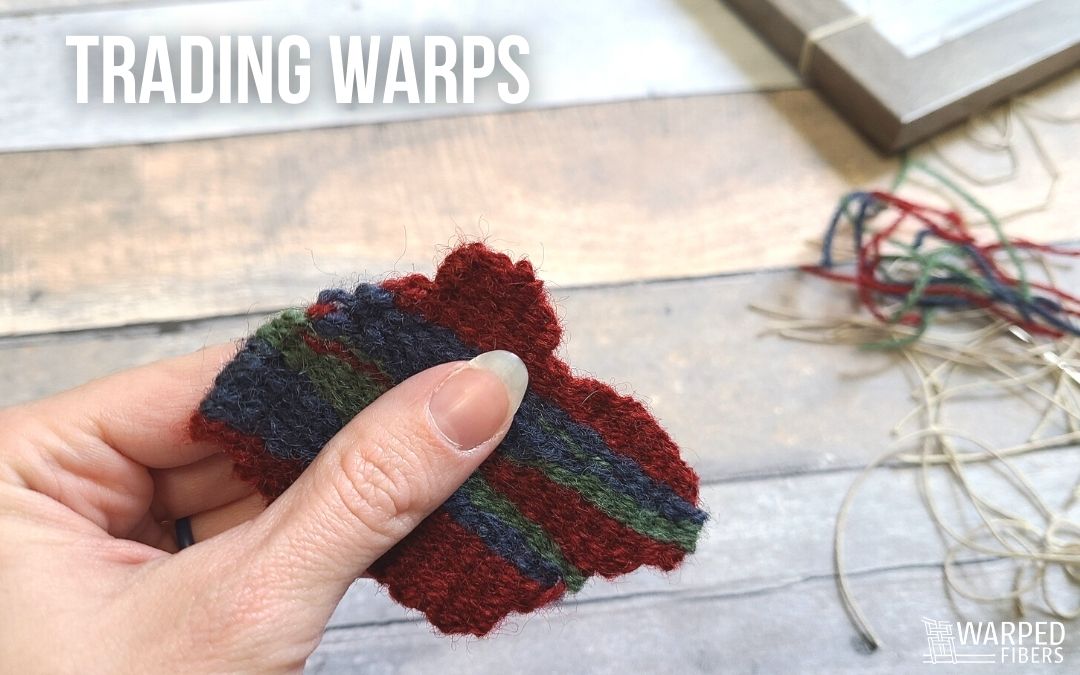