What Is Tapestry? Definition, Usage, and History 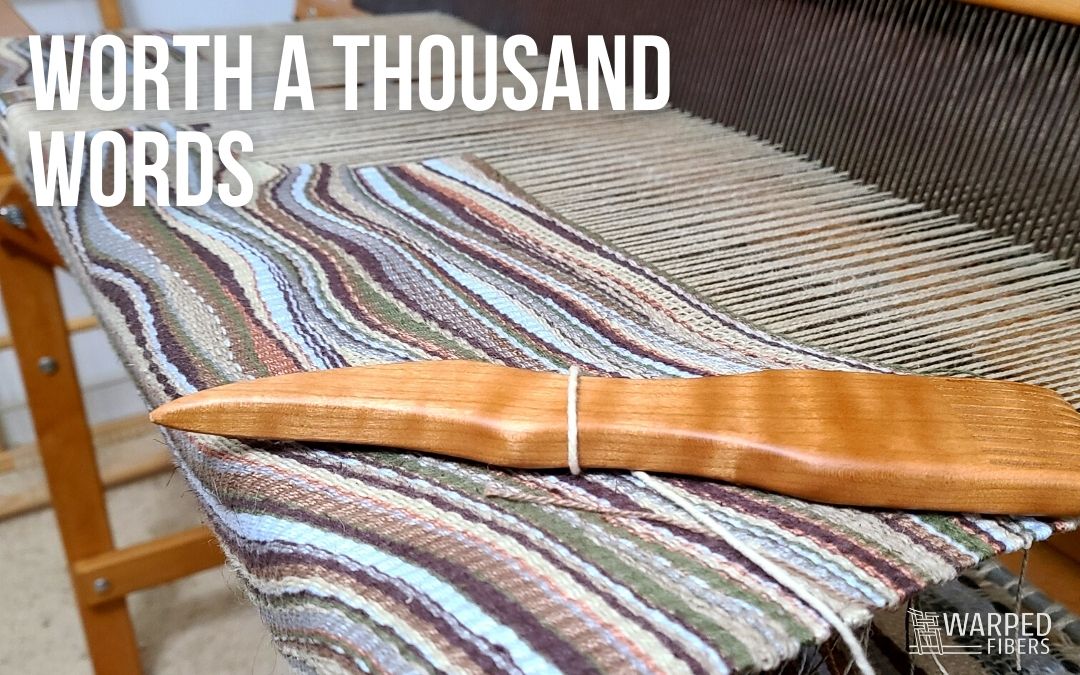 Tapestry is one of my favorite types of weaving! For that reason, it is actually the one that I use to demonstrate a lot of different things here on Warped Fibers – as you may have noticed.

But do you really now what tapestry is?

It is a type of weaving that is often misunderstood and even misrepresented.

The word tapestry is often used as a way to describe something with a rich and vivid story. This makes sense considering what tapestry was often used for when it was first created (more on that in the history section.)

It can also be used to describe an image-based wall hanging made of fabric.

You know the ones.

They are usually brightly colored and have mandalas and other similar imagery. These are usually lightweight balanced woven fabric – not actually tapestry. At least not by the actual definition.

So let’s first go over the definition because there are a few things that a weaving needs to have to actually be considered a tapestry.

That is it. That’s the entire definition.

Let’s break that down a little bit, though.

Weft-faced weaving is a type of weaving that features the weft and not the warp. In a finished weft-faced weaving the only place you can see the warp is at the top and bottom selvedges. Even then it is only if you choose certain finishing techniques.

A tapestry is generally going to have a smaller EPI than a balanced weave in order to allow room for the weft to compress completely.

Using a higher EPI is possible but would mean you would have to use a much thinner weft in order for it to beat down all the way. If you look at the diagram above you can see that the cross-section of the tapestry shows the warp completely enclosed in the weft. This creates warp channels that account for the rib-like texture. One great thing you can do is manipulate these warp channels for some interesting texture and emphasis.

One definite advantage to using a higher EPI and a thinner weft is that you can create more detailed weavings.

With that, though, it will take longer to weave.

Want to learn how to weave tapestry? It’s more than just imagery (although that can be a big part of it too!) Follow along with this self-paced online course that you can take from anywhere at any time.

Discontinuous weft is when your weft yarn does not go from selvedge to selvedge. Instead, your shed will have more than one yarn in it – usually different colors. This allows for the creation of imagery, patterns, or shapes.

Due to the structure of tapestry, high tension is needed for best results when you are weaving.

This will help the weft to compress more easily and completely cover the warp. When weaving a balanced or pattern weaving then the warp and weft will both deflect, but tapestry warp should stay straight. If your warp tension is too loose then you will have a harder time creating your weaving.

I am going to type that one more time just because I feel that is really important.

High tension is needed for the best results when you are weaving tapestry.

We can move on now.

It does not mean imagery

One of the most common misconceptions is that a tapestry is a weaving with an image.

This misconception is completely understandable.

While a lot of tapestries do have imagery and imagery is made with discontinuous weft that does not necessarily mean that it has to portray an image.

Take for example basically all of my weavings!

I weave tapestry most of the time, but I almost never weave imagery. Instead, I use the same techniques to weave natural patterns. You can also just weave shapes or play around with different textures. As long as the warp is completely covered by the weft and there is some discontinuous weft – you have a tapestry!

In fact, one of the most well known tapestry weavers doesn’t weave imagery. Sheila Hicks is well known for her small tapestries that were created as a sort of sketch book as she traveled. These weavings were mostly weft-faced and featured discontinuous weft, but none of them portray any sort of picture. Instead, most of her weavings featured blocks and strips of color.

If you can get your hands on it – I highly recommend her book: Weaving As Metaphor that has images of every one of her small sketchbook tapestries and essays. Just a warning, it is no longer in print, so it may not be cheap. That being said even the book itself is beautiful and is printed on handmade paper. Worth it.

*If you do want to weave imagery then make sure to check out my Weaving Shapes E-Book and my online tapestry course!*

Details from 2 of the tapestries in the Gallery of Tapestries at the Vatican, Italy.

The history of tapestry is quite fascinating and starts with the fact that in 4000 BCE the first domestication of sheep with the correct type of wool for yarn began.

Before that, the only materials they had to make yarn and therefore to weave with were cellulose-based (hemp and linen) and did not take dye very well. The weavings created with cellulose yarns at the time were simpler for this reason.

This was the beginning because it allowed for weft-faced patterns using different colored yarns. Suddenly people had an easy way to weave up shapes and they ran with it.

Tapestries were used for everything from clothing to wall coverings. It became incredibly popular as a way to line walls of drafty castles and homes due to its thickness and ability to tell stories (often biblical.)

One of the aspects of tapestry that made it so popular is that they could be rolled up and they were portable – unlike similar paintings of the time. You could take your narrative artwork with you for very little effort and it would keep your home from getting drafty.

It was a win-win.

How they were woven

Traditionally, they were often woven sideways and then turned upright when displayed.

You can see in the pictures above that the warp is actually going left to right! The vertical lines that you can see are actually weft hatching and not warp. They were and are still usually woven on an upright loom that allows the weaver to be able to see the entire design at all times. (More about looms later)

You can learn more about different ways to weave tapestry here.

The image-based tapestries (basically all traditional tapestries) were woven with a cartoon placed behind the weaving.

The cartoon is a drawing of the image that the weaver follows to create the design. Sometimes they were woven from the back and in that case a mirror was used to reflect the cartoon so that the finished weaving wasn’t backwards.

Today, many weavers still use a cartoon behind their tapestries, but some also draw directly on the warp.

Word of caution: if you are going to draw directly on your warp – make sure you are using an ink that will not transfer. Absolutely do not use sharpie!

It was also common that they were designed by a master artist and woven by a group of weavers all working on them at the same time. This included artists like the painter Raphael who was commissioned to design 12 tapestries for the Sistine Chapel at the same time that Michelangelo was painting the ceiling.

What is not tapestry?

That might seem like a weird question, but since tapestry is so often misrepresented it is important to talk about at least one very prominent example of a non-tapestry that is called a tapestry.

It is a 224 foot long narrative embroidery depicting the conquering of England by the Duke of Normandy in 1066. It is made with the use of wool thread on a linen fabric. Unlike a real tapestry, it portrays it’s story through the use of different embroidery stitches to create the imagery on the surface of the fabric instead of woven into it.

So why is it called a tapestry?

Unfortunately, that is a great question with no real answer.

My guess? It is because it is a textile with imagery that was used to tell a story back in a time when fabric was a great way to do it. It’s creation was for the same reason as many other tapestries (real ones) of the same era – to have a physical representation of a story and be able to transport it easily. For this reason, I can understand why they share a name.

If you are interested in weaving with embroidery then make sure to check my embroidery stitches for weaving post!

What type of loom should I choose for tapestry?

As mentioned above, a lot of tapestry weavers weave on upright looms – also called high warp looms. They are called high warp not because of their high tension, but because their warp is vertical to the floor. That being said, you can weave tapestry on any loom that allows you to have high warp tension. The higher the tension, the easier it is for the weft to flow over the warp and compress.

Low warp looms like floor looms are not always ideal because they can not always live up to the tension needed. This is the same for rigid heddle looms.

So what do I weave it on?

Most often I weave tapestry on my simple frame loom or my Harrisville floor loom ( a jack loom!)

I know, I know. I just said that jack looms do not usually make the best tapestry looms. Well, that is true, but the Harrisville does a decent job and sometimes you work with what you have! If you are looking for something portable then there are a lot of other great frame loom options that you can use as well!

If you are interested in learning how to weave tapestry then you can check out my classes page for my current online tapestry classes that you can take from ANYWHERE! You will learn how to weave many different techniques including building shapes, color blending, eccentric weft, creating imagery, textures, plus finishing, storage, and more! 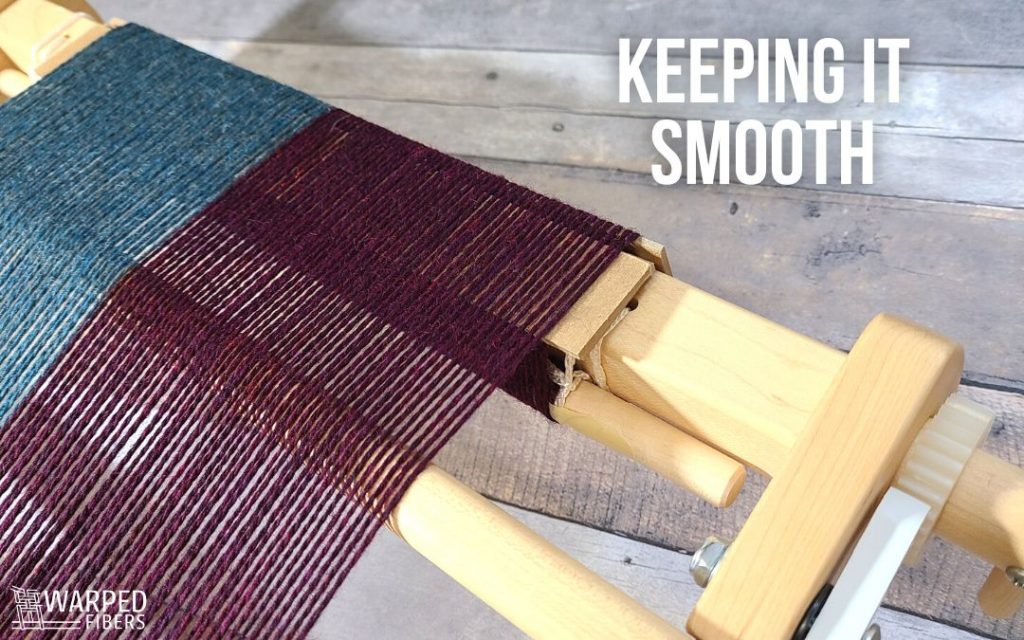 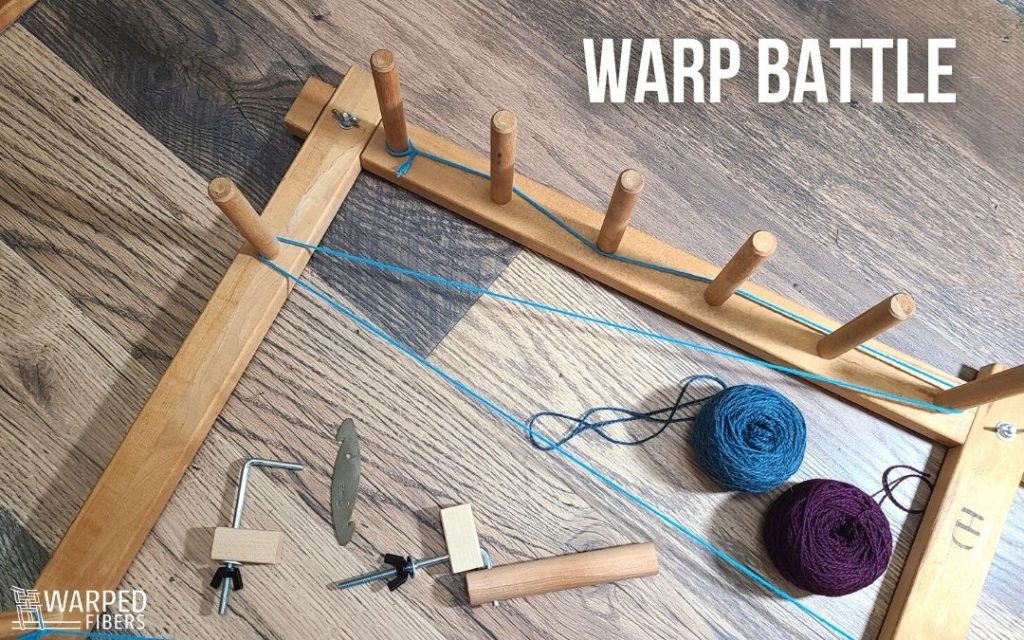 Check Out My Online Course!