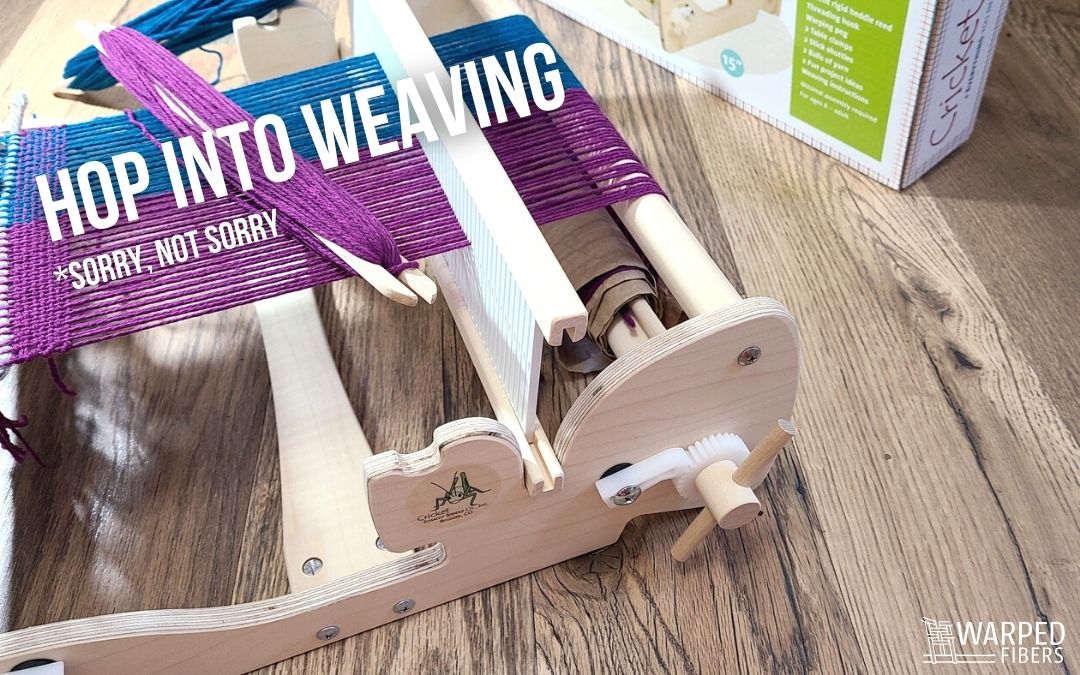 When you are looking for a loom the sheer amount of options can be a bit overwhelming. Once you have landed on a rigid heddle loom your options are more pointed, but still plenty!

Options for rigid heddle looms start inexpensive and go up and up depending on size, capabilities, and options.

I did some other reviews on rigid heddle looms that you can also check out!

First impressions of the Schacht Cricket rigid heddle loom are good! The box it is in is attractive with a bright and clear image of the loom you are about to start your new weaving obsession on.

Inside the box is almost everything you need to assemble your loom and get started weaving. There are a few extra things you will need, but you should have these already laying around your house. You will need a pair of scissors for cutting some of the plastic holding the front and back beam together, a screwdriver for assembly, and a rubber mallet to insert the handles.

The assembly itself is straightforward and simple to do. Your loom should come together in no time even if you have never put together a loom before. (I imagine most people do not have experience putting together different looms as I do!)

Helpfully, the cricket comes with full-color assembly instructions for you to follow.

There were a few kinks though that you should be aware of.

Starting off in the first step, you are attaching your front and back beams to the sides of your loom. This is a bit awkward to do when you first start since the sides do not stand on their own.

Nothing to be worried about though.

The attaching of the beams, on the other hand, is a bit of a struggle as the screws are very tight. It took a decent amount of strength and more time than I would have imagined to screw into the beams and get the loom standing up straight.

That being said, it was completely doable and all of the other screws on the loom went in with no issue!

The second trouble spot that I had when assembling the loom was inserting the handles into the ratchet beams. The first one slid into place like butter! The second handle, though, was very tight and required using a rubber mallet to bang it into place. The instructions mention you may have to hammer lightly, but “lightly” just would not be enough. Instead, hammer carefully, but with some force.

An important thing to keep in mind: if you need to hammer your handle into place, make sure that the screw hole on the handle and the hole on the beam are lined up before you start to hammer it into place.

These holes correspond to small screws that will hold everything in place. If the holes do not match up then you have 2 options. First option is to hammer the handle back out and try again! This is not ideal. The other option would be to screw into the wood and not the pre-drilled hole – also not ideal.

So just make sure they are in line to begin with and there will be no issues!

Overall, though, the process was pretty fast and easy.

Having your loom come unassembled may not be ideal for some people, but the assembly is simple and helps to keep costs low. This is because not only do you have to do some of the work, but it means the box that ships is also smaller. Smaller box = less cost to ship.

Not only is the Schacht Cricket rigid heddle loom unassembled when you buy it, but it is also unfinished.

This gives you the option to stain and seal the Cricket loom in any color that you want. This would add to the time it takes to get you started weaving, but it will also protect your loom and make it last for a long time into the future!

You do have the option of not finishing the loom at all and instead just assembling the loom as-is (like I did). Just note that the loom is not protected from any water damage or humidity – so keep it in an air-conditioned space and away from your water cup!

What the loom comes with

The Schacht Cricket really is a great beginner loom because after you put it together you have everything you need to start on your first project!

Inside the box is a warping peg, 2 table clamps for warping, an 8 dent heddle, heddle hook, 2 skeins of wool yarn, and 2 flat shuttles. My loom came with blue and purple, but the website says colors may vary.

The Cricket comes in 2 different weaving widths – 10 inch and 15 inch and both looms have a weaving depth of only 18 inches. This depth is on the shorter side of the other rigid heddle looms I have used so even though it does not fold, it will take up a little less space than some others. It actually takes about the same amount of space as my Schacht flip folding loom when it is folded!

This second beam also makes sure that your weaving surface is flat and not angled. (The Flip has a similar feature.) While this may not be an issue to you, it is something you may want to consider when it comes to how you want to weave.

While there is plenty of space to warp your loom despite the shallow depth behind the heddle, a little more room would make it a bit easier. Definitely not a reason to not purchase this loom, just something to keep in mind!

Weaving with the Cricket loom

Weaving with the Schacht Cricket is pretty straightforward and the heddle moves into all positions easily. This loom has a small depth behind the heddle, but more than enough weaving space in front of it. This means that you have a smaller loom but you will not have to advance your warp constantly.

One of the things that I really appreciate about Schacht rigid heddle looms is their cog and ratchet system. There is very little plastic on the entire loom and instead, the handles are made of the same wood as the rest of the loom. This gives the loom a really good quality feel despite its budget position in the Schacht loom lineup.

The Cricket also uses Texsolv cords to hold the apron bar in place. These are great because they will last a lot longer than stiff plastic like those found on the Ashford rigid heddle loom.

Who is the Cricket loom for?

The Cricket loom was literally made for beginner rigid heddle weavers to get their feet wet in the rigid heddle weaving world. If you are a fan of Schacht looms then this is a really good option to get you started.

This loom is also compact and portable so even though it does not fold like its older sibling the Flip folding loom, it is still good on the go!

If you are looking for a loom that will grow with you, though, then the Flip is a better option because it has a built-in space for a second heddle. This allows you to weave more intricate patterns and double weave. That being said, the Cricket has plenty of possibilities with plain weave and pick-up patterns that can occupy you for a while.

While the Cricket loom comes with everything you need to get started (even yarn!) there are other accessories made for the loom that you can purchase to get even more out of it.

So overall, the Cricket is a great starter loom or loom for weavers that are looking for something to get started weaving longer pieces on a budget!

You can get the Schacht Cricket rigid heddle loom and accessories on the Woolery! 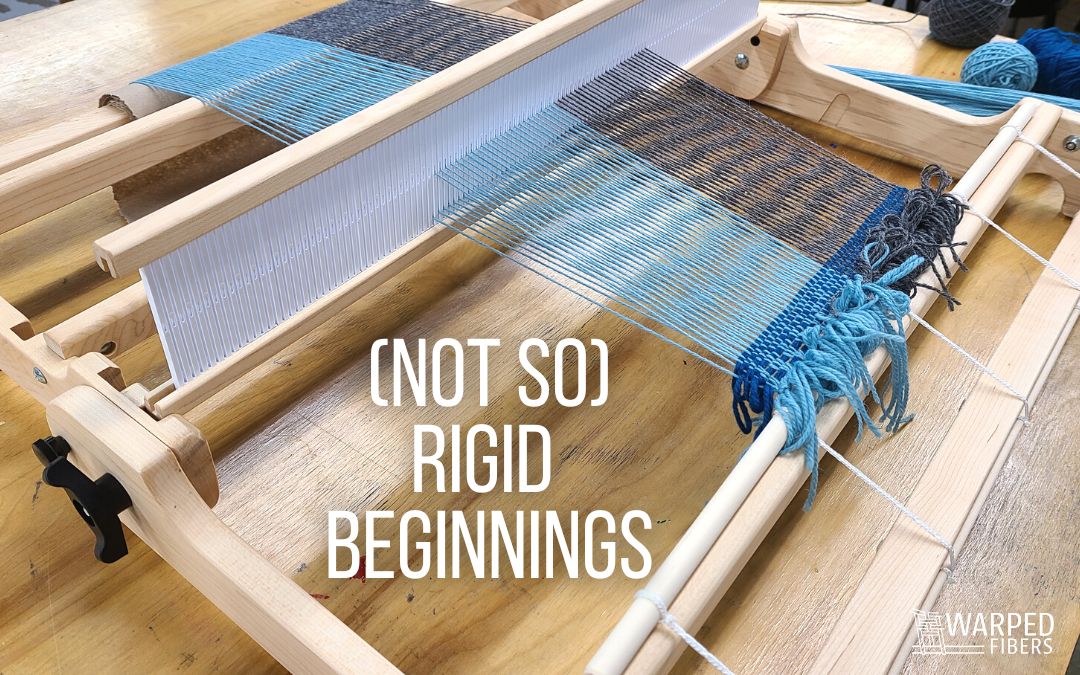 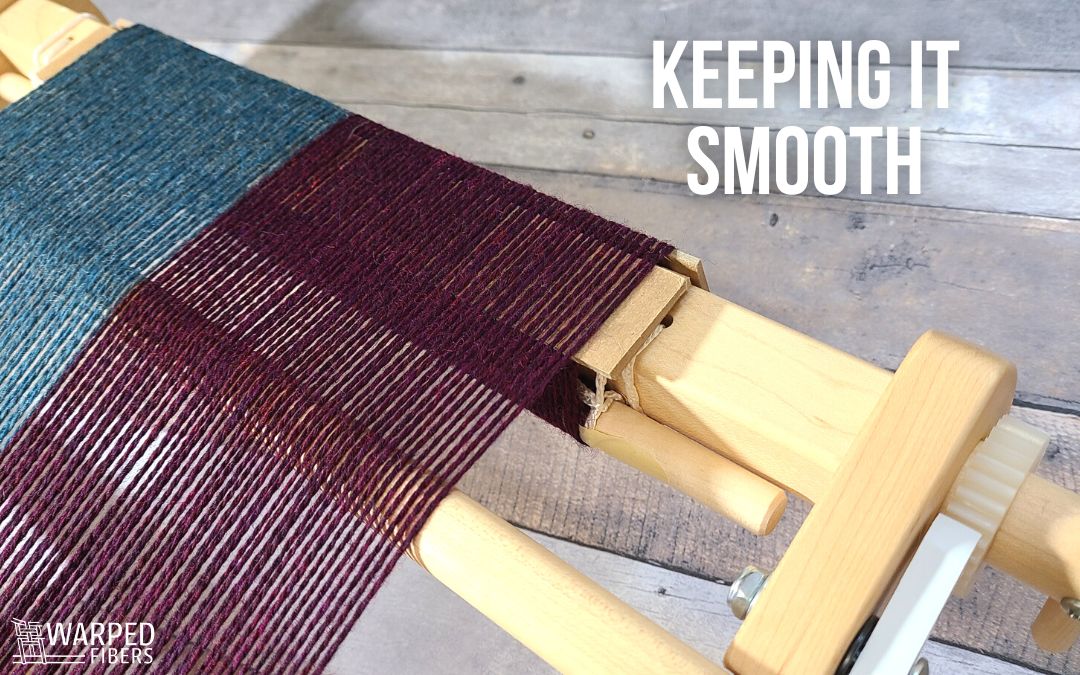 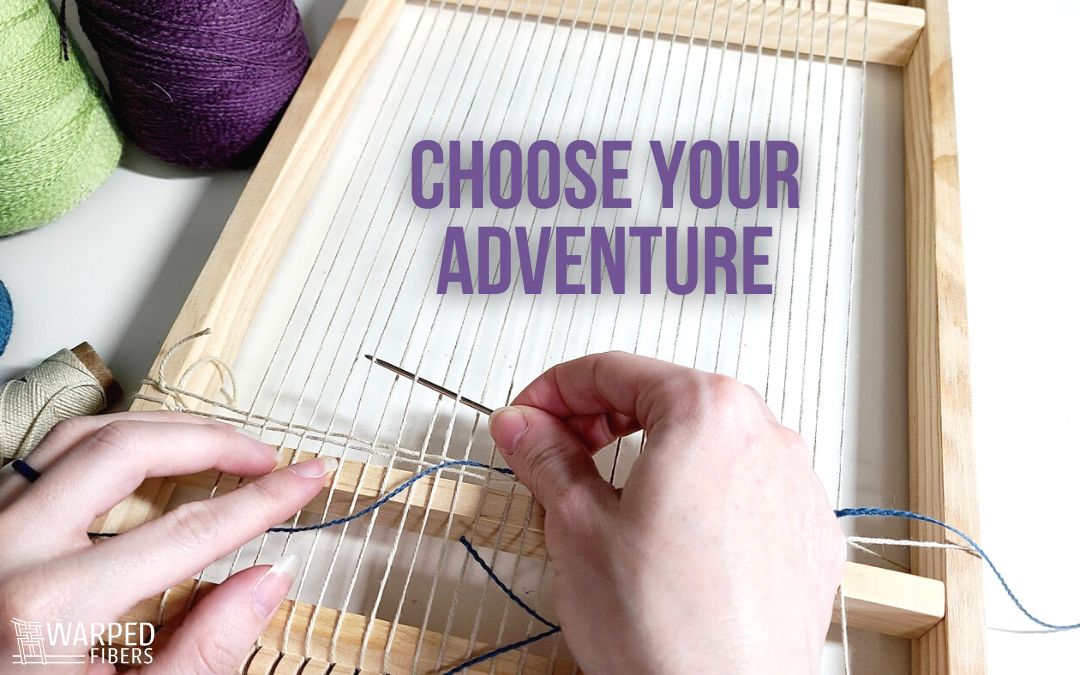